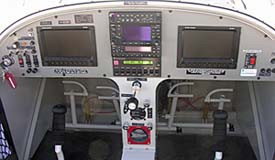 Corbi Air mounted dual 7-inch Dynon SkyViews but said the panel will be lowered a couple inches allowing the deluxe 10-inch displays. By my observation this panel enlargement will pose no problem even for very tall fellows. 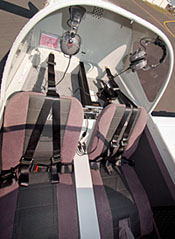 We used Alto’s air conditioning to make a very comfortable cockpit even while flying in strong sun under a bubble canopy. Until we powered down, I didn’t realize how much effect the system had. Corbi will sell this system to any airframe supplier. 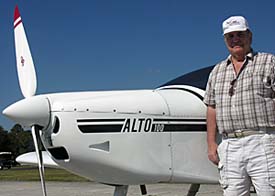 While Sebring 2012 crowds were the best ever and plentiful aircraft made for good shopping resulting in a flurry of sales, one of the best aspects of Sebring 2012 was ideal weather. Numerous pilots experienced some of their final choices before handing over the cash. Such perfect conditions also allowed reporters to get in on the action. *** I will be writing about several flying machines and I begin now with a mini-report on Alto 100. Following will be reports on the U.S.-made Allegro 2007, the new Bristell, and another American project, the Renegade. I’ll also have an update on value-leader, Aerotrek plus views of a fully-decked-out, open cockpit M-Squared Breese. In addition, UltralightNews and I did several new videos that we’ll upload as fast as we can. All the preceding is offered for free yet we appreciate your membership support as we log what appears to be an all-time record month for ByDanJohnson.com! |||| Alto 100 from Direct Fly is one of those (presently) lower tier producers. Many pilots focus on the Top-12 LSA sellers as though they are the only viable candidates, but as I’ve regularly noted, we have up-and-comers in the lower ranks. One of these may be the Alto 100, represented by Corbi Air. *** My flight impressions concluded with three excellent landings. Importer Ron Corbi was kind to compliment my skills but I give Alto most of the credit. Alto 100 is highly controllable allowing me to “feel for the runway” as Ron put it by which he means I flew a deep flare, main gear hung low, to let Alto descend slowly to the runway. I flared somewhat higher than optimal but Alto touched down every time with remarkable gentleness. Even with a short 27-foot span, sink rate was a respectable 600 fpm and glide on final was strong enough to permit slipping to increase descent. Even without its potent flaps, no one should have trouble getting Alto down in the first third of the runway. *** Earlier air work: • Stalls were extremely mild; every stall was modest even when the nose was held high in the air. • Accelerated (turning) stalls never dropped a wing though a pronounced buffet could be felt even by a novice pilot. • Steep turns were so easy, even at a 45-degree bank, that I could let go of the stick. *** Negatives are few: • Trim buttons lack some tactile feel so I quick-punched the stick-top controls to relieve control pressure. • As with most LSA you need to use but not overuse the rudders. Uncoordinated use of the controls set the electronic Dynon ball swinging though control feel is so positive that a few more trials quickly brought better results. • Alto 100 isn’t the fastest LSA; dashes in opposite directions showed a max cruise of about 104 knots at 3,000 feet MSL. *** For one of its primary markets, flight schools, Alto 100 is especially well behaved; students should love it yet learn excellent control skills. Experienced pilots will love Alto’s mannerly flight characteristics. *** Corbi said Direct Fly has built about 40 aircraft so far. The Czech company has been very responsive to requests for alterations to suit the American market, both for individuals and flight schools. I see Alto 100 as a strong candidate sure to rise in market share.