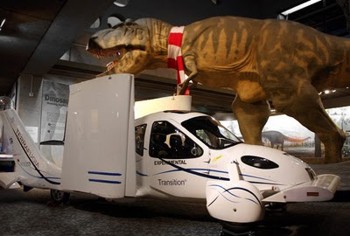 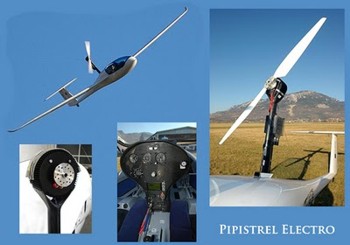 After taking a few days off to boat around Lake George, NY and shoot the Red Bull Air Race in New York City, it’s time to catch up on what’s been happening. *** The Transition “Roadable Aircraft” (I can’t help but prefer the chummier “flying car”) just got a weight exemption nod from FAA for an additional 110 pounds of MTOW (max takeoff weight). That nudges the vehicle up to 1,430 pounds. *** Terrafugia‘s request for the bump is meant to provide “…the structure and equipment necessary for compliance with the Federal Motor Vehicle Safety Standards (FMVSS) which are not found in other Light Sport Aircraft.” *** They’re talking about things such as airbags, energy absorbing crumple zone and protective safety cage. *** Interestingly, Transition’s maker Terrafugia initially asked for an MTOW of 1,474 pounds.  FAA in effect said “You can have what we gave the amphib makers, but no more.” *** This evokes the ultralight days, when the original 150 lb. ultralight spec kept growing …and growing. Looks like that accretion process is less likely this time around. *** LSA motorgliders seem to be coming out of the woodwork these days as I’ve been noting here with prior posts about the Lambada, Phoenix and Taurus Electro. Now comes news from Pipistrel, the Slovenia-based maker of elegant composite aircraft including the Sinus and Virus (guess they forgot to translate those words into English.) *** The new composite (Kevlar-reinforced cabin) Taurus LSA, based on the European UL-standard motorized glider, is in production and presumably headed for ASTM certification. *** The double-dose of good vibes here is the side-by-side two-seater self-launching glider has also had its first flight as an electric-powered aircraft and will also be available as an LSA motorglider!  *** The Taurus has all the chops to attract soaring enthusiasts: 1,210-pound MTOW, 550 pound payload, a whopping 41:1 glide ratio, retractable propeller pylon and a roomy cockpit. *** And the Electro ought to catch the interest of electric-powered fans, including pilots attracted to Yuneec’s two-seat, 45-foot span electric cruiser e430. *** The Taurus Electro design team was tasked with designing a system that: * enables climb to 6,000 feet or more on a single battery charge; * costs about the same as the internal combustion-powered Taurus (roughly $110,000); * maintains the current take-off distance of 560 feet; * keeps the empty weight comparable to the internal combustion powered Taurus with fuel at 704 pounds; and * keeps the current climb profile of the aircraft (560 fpm under power). *** These parameters pose an impressive and challenging manifesto. We’ll hope to catch up with the company and both versions of Taurus at Oshkosh. Pipistrel will have an aircraft in the LSA Mall plus their own company display. –DJ