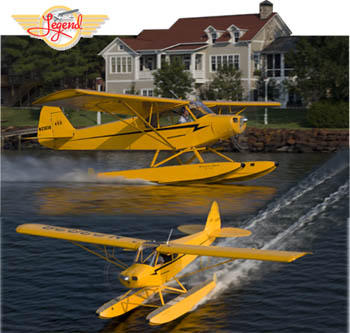 I am first a soaring enthusiast, but right afterward comes floatplane flying. It doesn’t get much better than zipping around five feet over the water, leaping over a tiny island and dropping down the other side. Photos courtesy of American Legend Aircraft Company, Jim Wilson Photography.

With summer just around the corner, floatplane flying regains its special appeal. In about a month, I’ll have an announcement of a very exciting, ultramodern new seaplane that will make your jaw drop. But today, you can get an incentive at the opposite end of the LSA technology spectrum. *** Legend Cub, which offers a float option for its replica Cub, is offering $2,000 of free options with the purchase of a Legend FloatCub, base priced at $121,000. If you’ve investigated floatplane or seaplane prices you should recognize a fair value, now with a couple grand of added goodies to clinch the deal. *** FloatCub comes with Baumann 1500 Floats and experiences minimal performance reductions in this configuration. FloatCub still manages a 92 mph top speed, only 10 percent below a non-float Legend Cub. And climb remains a respectable 500 fpm. *** Unlike the other two Cub lookalikes in the LSA fleet (Sport Cub and Savage) — and unlike the original Piper Cub — Legend offers doors on both sides. This is a major advantage when docking on floats as the pilot can exit either side. Having flown a number of floatplanes or boat hull seaplanes, I’ll say that flying on floats is one of aviation’s most fun activities.