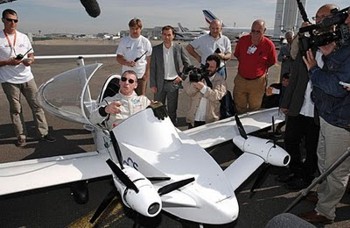 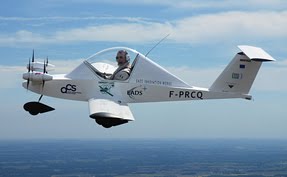 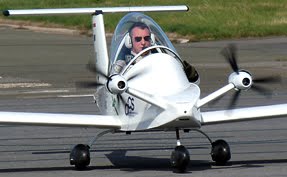 Two aircraft are getting lots of buzz lately for their advancement of aviation technology. *** First up is the electrified Cri-Cri, which looks like a toy but is in fact an important joint electric R&D project of EADS Innovation,  Aero Composites Saintonge and the Green Cri-Cri Association. *** The four-engine Cri-Cri originally debuted as a gas-engine powered, homebuilt acrobatic stunt plane many years ago. EADS modified the Hobbit-sized twin to serve as testbed project for developing electrical propulsion systems on helicopters, drones and other aviation platforms for the future. *** The original stunt plane had two piston mills, maxing out around 30 total horsepower. The all-electric Cri-Cri replaces those with four brushless electric motors.   *** The “go-gas” comes from LiPo, or Lithium polymer, batteries, all the rage in RC modeling circles for years for their comparatively high energy density. *** Brushless motors boast 80% or better efficiency, compared to the 20% or less of average internal combustion engines. The technology challenge for electric flight lies in getting the “fuel” — batteries in this case — to deliver even close to what gasoline produces per equivalent weight. Once that Holy Grail is developed, electric transportation will transform all our lives. *** Back to the Cri-Cri, which just posted its maiden flight in France. Current endurance is 20 to 30 minutes — a little putt-putt of an airplane with a 16-foot span can only carry so much in battery weight — but the ultimate goal is to develop hybrid propulsion applications anyway, not find electric-only solutions. Still, there will be positive fallout for all electric flight projects worldwide. *** The other consistent newsmaker is Terrafugia’s Transition LSA. The Massachusetts company is gearing up for low-volume production of the car/bird, to start no sooner than late 2011 in a new 19,000 sq. ft. factory in Woburn. *** The big changes from the original flying prototype, which made a total of 28 short test hops and demonstrated the need for major mods, include: •   single stabilator at the rear rather than the canard, which reportedly did not provide adequate pitch authority •  larger, 3-blade pusher prop between the tail booms • 100hp Rotax 912S engine is now linked to rear wheels rather than the fronts. *** Two prototypes are under construction: one for drive testing, the other for ASTM flight certification. *** The price, which has steadily crept up during the R&D phase, is now projected at $200K to $250K.