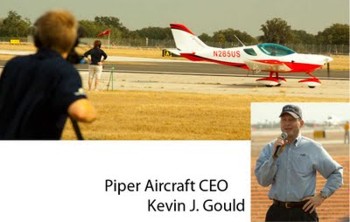 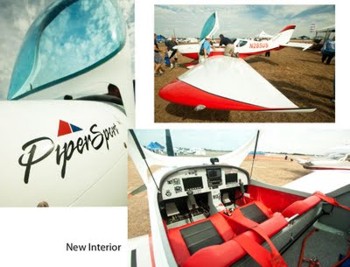 Piper Aircraft’s Prez/CEO Kevin J. Gould made it official today at Sebring: the company has entered into a new, worldwide-exclusive distributor licensing agreement with Czech Sport Aircraft that will bring the SportCruiser to market – by April! – under the new name PiperSport. *** As I reported yesterday, Piper did not buy into the company as had been rumored. *** Piper representatives told me there will be some changes to the aircraft, such as refining control harmonies, to optimize its conformability to Piper’s long heritage of entry-level airplanes. *** But by and large, this is still the SportCruiser, which is a fine, Euro-proven design that is not only an excellent training airplane but most definitely a lot of fun to fly, and a dream to land. *** CEO Gould and other Piper personnel addressed a gathering of public and media to make the important announcement. *** Gould began his remarks by evoking the original Piper Cub, what he described as “one of the original ‘LSA’ aircraft of its time.” *** “Piper is entering what is undeniably one of the most exciting market segments in general aviation,” he continued. “This burgeoning segment is becoming vital to our industry and playing an ever-increasing role in developing general aviation’s next generation of pilots.” *** “The PiperSport is an amazing entry-level aircraft that will bring new customers into Piper and lead the way…into more sophisticated and higher performance aircraft within our line over time.” *** Some highlights of the deal, and the airplane: *** three models are on sale as of today: The basic PiperSport ($119,000), PiperSport LT (primary trainer at $129,000), and PiperSport LTD (professional model, $139,000).first deliveries are promised by April of this year!parts for existing SportCruisers will still be available.parts for PiperSport will be available through supplier Aviall, Piper’s partner. *** The interior’s new leather seats are gorgeous. *** Piper did not signal any intention to put a heavier “GA” engine into the PiperSport, as Cessna has done with the Skycatcher, choosing to stay with the Rotax 912, 100hp engine. *** One thing I was happy to hear: a BRS airframe recovery parachute system is standard equipment on every airplane. *** Other aircraft features: *** 1,200 fpm climb ratecruise of 115 Kts600 lbs. useful loadpremium auto “mogas” (unleaded fuel) or 100LL avgasaircraft has metal, not plastic, fuel lines: impervious to ethanol in mogas, which can eat away at plastic30-gallon fuel capacity, 144 lbs. total baggage (cabin and wing locker storage)range: 600 nm *** The basic PiperSport model comes with: *** Dynon D100 Flight displayGarmin 495 GPS, SL40 Nav/Com and GTX 328 TransponderAmeriking ELTPS Engineering PM3000 intercom *** Just in case you missed the link above, here’s the page, which just popped up on the website at the same time as the announcement in Sebring.