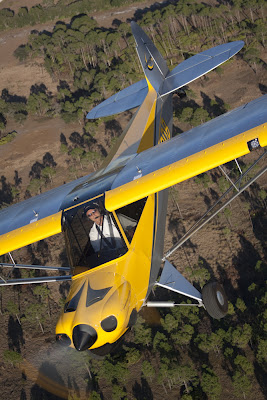 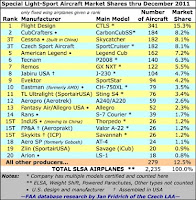 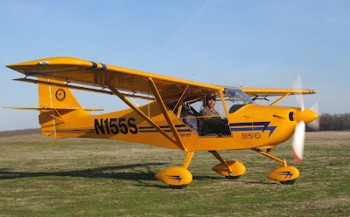 The much-anticipated LSA Market Share numbers as compiled by LAMA Europe’s head dude Jan Fridrich are up on Dan Johnson’s blog this week. They expand on some anticipated, surprising and overall encouraging themes. Sales were up at Sebring and many companies are posting strong numbers. *** First, in the No Brainer Dept: Cessna and CubCrafters won the year hands down. *** Big Cessna, as the charts Dan and Jan compile clearly show, had the largest number of registrations in 2011 with 134, a record for the LSA industry and fully 48% of all listings for the year. The numbers reflect Cessna playing catchup on its 1,000 order glut back at the beginning of the LSA movement. *** As Dan is always quick to clarify and I like to remind you, these are not sales numbers, but actual registrations and thus will lag sales numbers somewhat or, in Cessna’s case with their long initial production delays, quite a bit.   *** The salient point here is that sales numbers can reflect a lot of “The buyer is just about to sign!” enthusiasm from dealers, whereas registrations are hard numbers and that’s why Dan prefers to shoot that way, i.e., straight. *** One success story I know of gives a good example of just how to regard these registration numbers: Jim Lee of Phoenix Air USA has racked up 15 sales of his fab Phoenix motorglider in a little over a year, but initially slow production means he’s only been able to deliver a handful so far, although the factory is hustling to catch up. *** If the beautiful motorglider’s sales numbers were factored in, Phoenix Air would be number five on the Calendar Year 2011 list’s top 10.   *** Another case in point: CubCrafters, which holds number 2 position on both the Total Market Share list and the Calendar Year 2011 final tally, notched 34 aircraft registered through the end of the year, and 184 all time total. *** Meanwhile, Randy Lervold, Cubcrafter’s General Manager (see our next issue of Plane & Pilot, which features my story on the Carbon Cub SS) announced just before Sebring that the company expected to deliver its 200th aircraft by this month, along with sales continuing at a strong enough pace to justify the new production facility the company built recently.   *** Some other notes, and check out Dan’s Splog for more of his industry-savvy insights: •  SportCruiser: US Sport Aircraft is doing well filling the gap left by Piper’s sudden departure from the LSA world with 20 registrations last year. • Flight Design USA with its sophisticated aircraft models and ever-expanding sales/service centers across the country, continues to hold sway over the U.S. market with 341 total registrations. FD came in third for 2011 with 21, just edging out U.S. Sport Aircraft.   *** The company continues to find innovative ways of generating enthusiasm for their top-quality CT line of aircraft. Two additions this year drew the limelight: the CTLE Law Enforcement aircraft (see my Sebring post in January) that’s catching on with officialdom, and the CT4 four-seat General Aviation entry in development. •  Jabiru USA and Arion: Both companies, producers of the J230  *** and LS-1 Lightning respectively, tied for 2011 registrations with 7 each. Arion has pushed up into the 20th all time position with 18 total registrations for its sleek and lovely low-winger. Jabiru has registered 104 U.S. aircraft (and many more overseas for the Australian parent company) and continues to be a solid contender with its large cargo space and stable, long-distance-cruising personality. • Aerotrek: Here’s another company that’s hung in there through the tough economy by virtue of the enduring popularity of its tube ‘n fabric, tricycle/taildragger option, folding-wing mainstay models (A220 and A240).   *** Attractive pricing and quality fun-flying airplanes are the secret recipe. Company head Rob Rollison told me at Sebring he’d sold two aircraft at the show and two the previous two weeks, and production is booked for the next several months. 2011 was a good year too, with eight registrations but even more sales. *** Thanks again to Dan Johnson and Jan Fridrich for their excellent work in bringing to light trends in the LSA industry.