Electric aircraft may still have minuscule market share but innovations could change that in the near future. As Aero correspondent, Roy Beisswenger wrote, “This is a rapidly changing technology with both motors and applications showing up all over Aero Friedrichshafen.” This year Aero management concentrated them in one of the big halls where small startups to the heavyweights were located. Thanks to Roy for several reports from Aero, of which this is one. —DJ 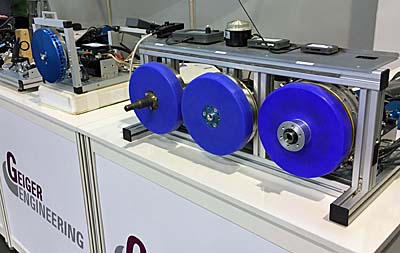 Geiger Engineering electric motors, components, and even props are offered.

Many of the exhibited motors are for very light applications such as light-weight shift control trikes or gliders but motors are becoming more powerful. With an increase in power, new technical problems need to become overcome. For example, the larger the power capability of the motor, the more cooling is required for the motor. Smaller motors are mostly air-cooled, but some of the medium and larger motors require liquid cooling. This doesn’t mean that the motors have radiators, but liquid is built into the motor to help wick heat away from hot spots that are created when electricity is converted to mechanical power.

Essentially we find three components to electrical power systems: (1) the motor itself, (2) batteries, and (3) a controller. The controller makes sure that the proper amount of electricity is delivered to the motor. Most of the electric motor developers are also developing controllers for their motors since the two work with each other so closely.

Some companies, such as the German company Geiger, are offering complete systems from batteries to motor, and sometimes even propellers. 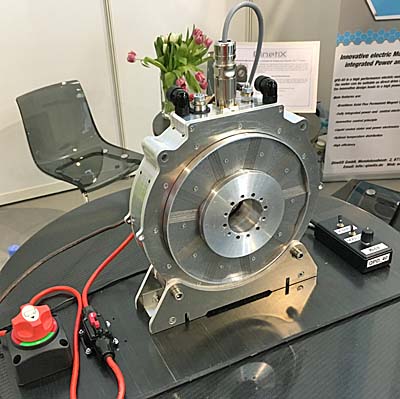 A smaller German company, Qinetix, has integrated the controller with the motor, easing the task of airframe makers.

Another German company, Qinetix, is not only developing a motor and controller but is placing the controller inside the case along with the engine. It means that aircraft builders only have to mount the motor and run power leads to it. The QPD-40 is an integrated system that is actually designed to be an electric replacement for the now-discontinued but once very popular Rotax 503 two-stroke engine. The designer explained that he had a trike with that engine and wanted the replacement for himself. He figured others would want it, too. The motor is still being tested and should be available later this year.

Of course it takes a while for prototype motors to make their way onto production aircraft. A walk around the displays reveals that the motors from Geiger Engineering are finding a good reception from airplane manufacturers or experimenters. Geiger is currently producing five motors ranging from 12KW to 50KW (16 to 68 horsepower) making them popular for a variety of airframers. Even more appealing is that Geiger is one of the companies offering complete systems from battery packs designed for aviation all the way through propellers.

To Roy’s report I add my own observation: As government agencies around the globe ponder how they wish to regulate electric propulsion — often prohibited by existing regulation, as in the USA — these devices are changing fast enough to make it challenging for authorities. From automobiles to airplanes, rule writers are lagging the development but they may catch up before these motors hit the market in volume. Batteries are improving at a slower pace but may be one major breakthrough away from going mainstream. After that, electric cars and airplanes may give combustion engines a real run for their money. —DJ