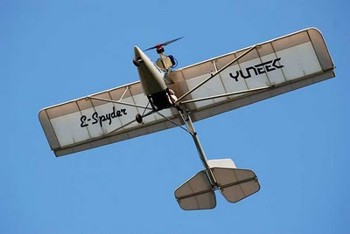 One of the interesting speculations in a recent Wired magazine article on the E-Spyder electric ultralight being developed by Flight Design USA‘s (and FlightStar Aircraft‘s) Tom Peghiny invokes turning the lemony limited range of current early electric aircraft into the lemonade of broadly-applied commercial use — specifically in flight schools. *** The first production E-Spyder, soon to be sold for around $30K, will have no more than 30 minutes of range. Yuneec’s two-seat E430, now scheduled for 2012 debut, aims for a 2 hour flight endurance. *** But two hours clearly is more than enough for the typical local flight lesson. And with spare — and charged — battery pack modules ready to go to quick-swap out of electrical “fuel tanks”, flight schools could run training ops as easily as their current gas engined counterparts. *** No distracting engine noise and frame vibration; no lean/enrich fuel settings; no starter motors or smelly exhausts to deal with. No pollution. Just quiet, satisfying, smooth flight in which the basics of flight training can be taught with, one can easily imagine, far greater efficiency and enjoyment. *** And the relative costs for students could be much, much cheaper as well. *** Yuneec postulates owner flight costs around $10/hour. How many new pilots could be licensed, even with the same instructor fees of $30-50/hr factored in, at a significantly lower price than current flight school rates of $125/hr and up? *** Beyond the tantalizing prospect of teaching primary skills in an electric aircraft lies the Holy Grail: growing GA pilot numbers by churning out more new licensees, who would surely flock to the new tech appeal of lower-cost electriflying, since cost is the single most often identified cause of lower flight student numbers. *** It’s also not hard to imagine aircraft rentals of $50 per hour or less as electrics prove themselves in day-to-day operations, further stimulating more flight hours for FBOs. *** And once the quest for greater battery storage density bears fruit — several promising research projects already show many-fold increases per equivalent battery weight — longer range electric aircraft will bring cross country flights, without burning any gas at all. That’s a day we can all plausibly dream about right now: it may be just a few short years ahead. *** Back to the present: Tom Peghiny recently taught non-pilot Flight Design employee Mathew Fortin to fly — in the E-Spyder prototype. *** (Full Disclosure Dept: Tom, I am extremely envious.) *** Since the ultralight is a single-seat aircraft, Fortin made several extended taxi and on-the-deck hops to acquire the basics before Tom kicked him out of the nest, which gave the electric fledgling the distinction of becoming perhaps the very first electric student pilot ever. *** Here are some of Mathew’s remarks from the Wired piece: *** “It was less intimidating having the electric motor, not some loud clanky gas engine…It really makes it easy to focus on flying.” *** Flight schools, are you listening? *** Post Script: Remember those early photos of the first days of flight with delicate, boxy-shaped biplanes like the Wright and Curtiss Flyers? Check out this video: it shows several of Yuneec’s electric-powered flying vehicles at Yuneec’s factory unveiling, at what has to be the world’s first all-electric meet. *** You’ll notice two things at least: how well all the vehicles fly, even the power-pack paragliders, in the stiff wind (check out the smoke trails); and how you can barely hear any noise at all, even on the low passes. *** Now imagine it’s 2110, and your descendants are looking at this tiny, funky old internet video and marveling that we flew such primitive electric birds. Then try to imagine what they might be flying. Fun, huh?