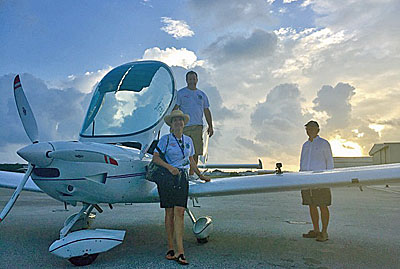 Flying light aircraft to Cuba seems to be a kind of new normal. Whatever the politics of the relations between governments, the fact remains that pilots enjoy using their aircraft and want to fly to interesting destinations. To many, Cuba is one of those places, a reasonably short flight from the USA… albeit over a stretch of mighty ocean.

“Exploring new destinations and sharing the joy of flight are two of the key driving forces behind Cruiser Aircraft Inc. So when plans were announced for the first VFR Air Rally,” the company announced, “Cruiser Aircraft.eu CEO Oscar Starinsky and Thomas Schrade president of the company’s U.S. presence knew they had to be a part of it.” Cruiser Aircraft is a relatively new entity — seen earlier this year at the Sebring Expo. The new enterprise is the exclusive western hemisphere importer of Czech Sport Aircraft’s SportCruiser. 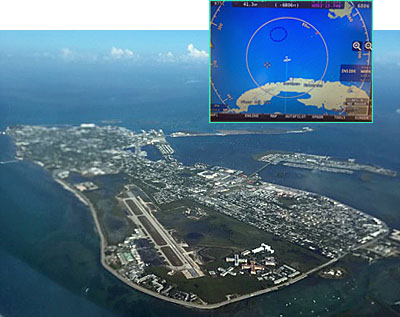 Starinsky and Schrade saw the rally as an opportunity to forge new relationships and take the first steps in revitalizing the once vibrant general aviation community in Cuba. They also sought to commemorate the first aviators to make the crossing from the Florida Keys to Cuba. “Rivals Domingo Rosillo del Toro and Augustin Parla accomplished the feat of the longest flights over water in May 1913,” said Cruiser Aircraft.

“Flying in SportCruiser N767SX, Starinsky and Schrade were joined by Cruiser team members Bob Harris and Erin Porter in SportCruiser N707SX,” noted the company. The four set out from the company’s current base at North Perry Airport Thursday, May 18, flying to Marathon (KMTH) to gather with other VFR pilot participants along with International Air Rally organizers Catherine Tobenas and Camile Dumont. The pair gave a detailed briefing.

“After filing a very specific flight plan and learning the intricacies of the specially designated military corridor to be flown by the seven aircraft in the rally, spaced five minutes apart, the group launched on the morning of May 19, 104 years and two days after del Toro’s first successful crossing,” said Cruiser Aircraft. 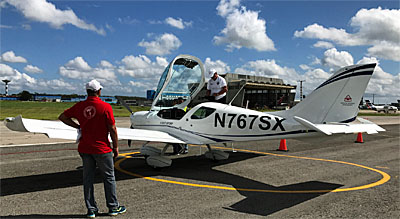 Like del Toro and Parla, the Cruiser team faced unfamiliar and possibly treacherous circumstances. This was a new experience for the pilots.

“Deviating in any way from the flight plan was strictly forbidden.” said the company. “The pilots were sternly instructed to follow predefined waypoints before finally reaching MUHA in Havana.”

“Along with people-to-people exchanges and taking in the vibrant sights, smells and sounds of Havana and its environs, Cruiser’s primary mission was realized,” said Cruiser Aircraft. The also reported that Oscar Starinsky met with Ernesto Efren Adlum Segui, President of the Club de Aviacion de Cuba to “discuss a potential training center to help revitalize general aviation in Cuba and make the long-forgotten dream of flying a reality again for its citizens.” 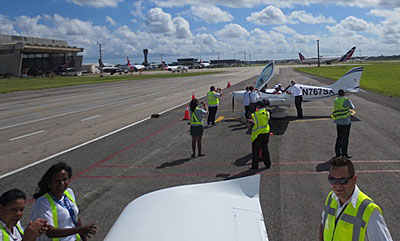 After a three-day visit in Havana, the Cruiser team returned to Florida clearing customs at KEYW before returning home to North Perry Monday on May 22.

“The annual VFR Air Rally to Cuba is just one of the special experiences Cruiser Aircraft Inc. intends to bring to the SportCruiser community when it opens its new facility in Sebastian, Florida this summer,” said Cruiser Aircraft. The company said their “Cruiser Club will allow SportCruiser owners to experience exciting destinations around the world in SportCruiser aircraft.” For more information visit www.cruiseraircraft.com.

Cruiser Aircraft Inc. is currently based at North Perry Airport in the Miami area but reported plans to work on establishing a new headquarters at Sebastian Municipal Airport to be operational summer 2017.