In the late 1990s, the Italian JetFox 97 flew as an evolved ultralight. Resembling the FlightStar that sold around 1,000 units in all configurations, JetFox differed by enclosing the engine and cabin. Instead of a simple tail boom the European ultralight had an aft fuselage among other refinements. As Light-Sport erupted into the marketplace, JetFox appeared to slip away. However, good ideas can be recycled and revived. Such appears to be the case for FX1. 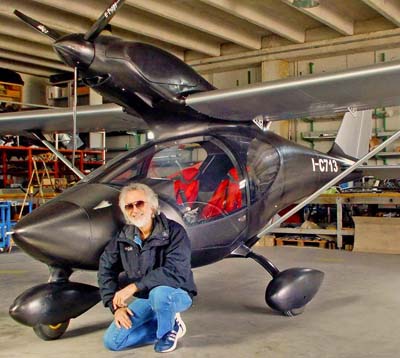 John Hunter  has extensive experience with Drifter, AirCam, and several Aeroprakt models. Recently, he has been in Italy visiting Innovaviation to conduct the first test flights.

Created by JetFox designer, Alfredo Di Cesare, FX 1 is a modern aircraft cabin and fuselage structure made primarily of light weight carbon-graphite composite with wings and tail built from aluminum. Under the shapely skin is a cage of welded chromoly steel that provides robust occupant protection.

Alfredo wrote, “FX1 is a fourth-generation sport plane [that] evolved from successful European designs of the last three decades.” Using computer-aided design FX1 “has been carefully engineered to optimize all aspects of a proven configuration.”

Additional details including many more photos plus design considerations can be found on Innovaviation’s website.

John Hunter wrote, “My first impression on flying the FX1 production prototype was that it has a remarkably solid feel, indicative of the rigidity of the airframe.” His report continues… 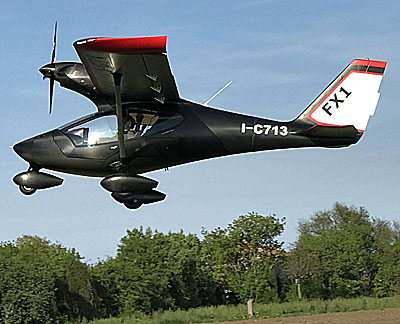 “The aircraft is stable, yet responsive. It does not display control sensitivity in any axis, yet control response is very positive. It can easily be flown with neutral trim throughout it’s speed range, including all three stages of flap deployment (15º, 30º, and 45º).

“In flight it does not exhibit significant changes pitch with the application or retraction of power, and controls do not become heavy from changes in configuration or speed. Stall behavior is “tame” and predictable, exhibiting a mild break, shallow pitching and a quick recovery.

“Seating is comfortable, and adjustable fore and aft. The optional side-stick control system works well, and I found the aircraft easy to fly from either seat (left seat requires left-hand control, with right-hand for the right seat). The standard control will be conventional dual joy-sticks, centrally mounted. A vernier throttle is installed at the center of the panel. Control for the hydraulic brakes is a manual lever mounted forward between the seats, and includes a parking brake valve. Turn radius is adequate for ramp maneuvers. 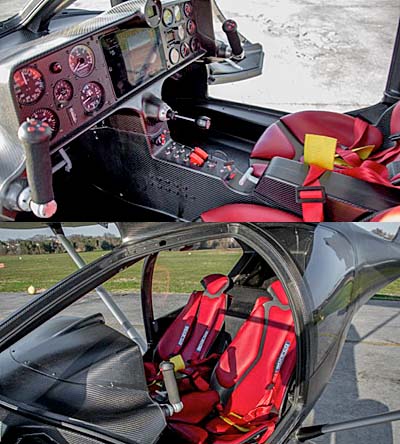 “The first flap position (15º) is recommended for takeoff. On turf, the nose gear can be rotated in 5 seconds, and liftoff occurs 8 seconds from standstill, with winds calm and a takeoff weight of 950 pounds (solo flight with 50% fuel). Takeoff roll is approximately 320 feet. Standard day rate of climb at 80 mph is 1,050 feet per minute.

“On landing, the first flap position is recommended on downwind, second on crosswind (30º), and third on final (45º, full flaps). The fowler flaps are effective, and necessary for short field operations. The aircraft exhibits low drag, and speed control is imperative for short runways. The aircraft flares well, and is easy to land. When I asked for speeds, John noted he used 75 mph on downwind, 60 on base leg, and 55 over the fence after full flaps (45º) were deployed.

“The cabin is comfortable, relatively quiet, and visibility is excellent. The FX1 has a high-quality feel, and is a pleasure to fly.” 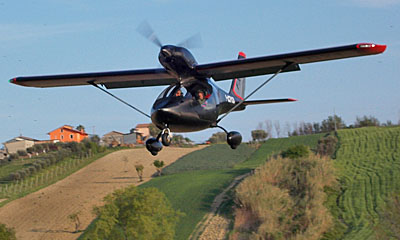 FX 1 was designed to conform to American regulations. John’s goal has been to establish production of the FX1 in the United States, both for the domestic market and for export. “I have been working with Innovaviation over the past two years towards that end, and having just flown the plane, we are definitely on the right track,” John expressed.

When Fx1 makes landfall in the USA, we will look toward a video interview with John and perhaps a fuller flight report. If interested to keep up with John Hunter’s effort to import FX1, call (207) 271-3040.