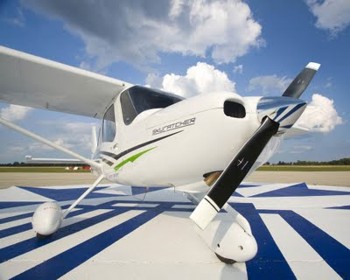 For those who missed the announcement back in 2007 when the Cessna C-162 Skycatcher was first announced, the planned delivery of the very first production airplane will stay in the Cessna family, as the happy owner is none other than Rose Pelton of Wichita, Kan. *** In case that name sounds familiar, it should: hubbie Jack Pelton is Cessna’s CEO. *** “When I first saw the Skycatcher mockup at Oshkosh in 2007, I knew that was the aircraft I wanted to learn to fly in,” said Mrs. P. “I couldn’t be more excited…” *** More than 1,000 of the new, all-metal, Continental O-200D-powered SLSA have been ordered. *** Also in the next issue of Plane&Pilot, you’ll want to check out the story of King Schools’ new Web-based training system for sport and private pilot certificates. It’ll be available through the Cessna Pilot Center network of flight schools. *** Side-Note Dept: Here’s an interesting back-and-forth between the John and Martha King and Evektor VP Jim Lee on the King’s blog about the spin testing on the C-162, which led to two separate crashes. As Lee attests, the Skycatcher isn’t the only spin-tested LSA – the Evektor SportStar had 400 spin tests! *** Makes me want to know how many other SLSA have had spin testing, though ASTM doesn’t require it for the LSA certificate. More on that as I do some digging… *** Meanwhile, we wish Mrs. Pelton many happy hours in her new Skycatcher. That airplane should be highly valuable one of these days for its place in Light Sport history. *** —photos courtesy Cessna Aircraft