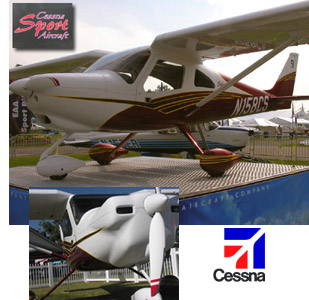 Visitors will see the “final” version of this prototype at Oshkosh. We also expect to hear what engine they selected…Rotax or Continental. And, I expect we may hear another major GA producer announce LSA plans, too.

Few will be surprised at this point, but today Cessna made their official announcement that they will proceed with their LSA program. Though we’ve already seen a proof-of-concept aircraft, the Wichita company says they will unveil a full-scale mockup and program details at Oshkosh in less than two weeks. “After conducting extensive market research, it is clear to us there is a great need for this aircraft as we strive to drive down the cost of flying and learning to fly,” said Cessna CEO Jack Pelton. “We believe this aircraft will make a major contribution to stimulating new pilot starts and will encourage already-licensed pilots to continue to fly because it will be more affordable.” Pelton reported that the Cessna Sport incorporates several innovative features into the design and they believe they can deliver what they say is “the finest aircraft in the category at an attractive price.” The company will brief media on Sunday, show the aircraft on Monday the 23rd, and have a forum on the Cessna LSA later on Monday.