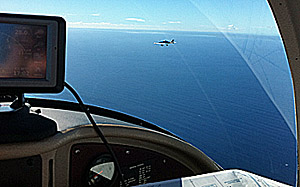 Using my trusty Garmin aera (plus a 496… an interesting comparison), the over-water navigation was simple. 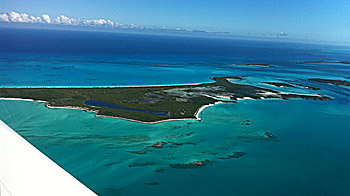 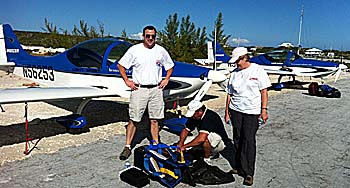 We packed lightly but still had quite a bit of gear in the twin Breezers.

While my former home state of Minnesota grappled with enough snowfall to collapse the Metrodome’s inflated roof, I’m still hanging out in the Bahamas (yeah, I know, tough job…). *** After the First International Sport Pilot Fly-in concluded all but a couple Breezers flew home. Our group of four, lead by islands expert and U.S. Breezer importer Mike Zidziunas, took a pair of Breezer LSA south to an island called Staniel Cay (pronounced “key” unless you want to easily identified as a tourist). The experience was spectacular in many ways. The trusty Rotax 912s ran smoothly and confidently for as one of the Fly-in pilots put it, “Your engine doesn’t know it’s over water.” *** On the planned trip home, assuming strong headwinds die down following passage of the same giant cold front that dumped all the snow in parts of the U.S., we plan to wend our way through some visually stimulating inter-island flying at low altitude. Mike will install a video camera on the tail of one Breezer and flying in close formation, we aim to capture the twin LSA in some footage the Bahamas tourism office is already awaiting anxiously. Update 12/15/10 — This worked great; check Breezer USA‘s website to view after they edit and post. —DJ *** My overall experience suggests that LSA can easily negotiate and navigate flights from mainland USA and our modest fuel usage was remarkable news to others we’ve seen here in the Exumas (a southern chain of islands in the Bahamas). We burned just 6 gallons over the Atlantic en route to Freeport from Fort Lauderdale, another 6 flying from Freeport to Nassau and about 4 more to reach Staniel Cay. Averaging better than 20 mpg at 120 mph makes for quite economical travel. Breezers carry 21 gallons of fuel and with good planning, this proves to be plenty to reach these tropical destinations. *** Large FBOs catering to the jet crowd — such as Odyssey in Nassau — offered polite and excellent service even though we bought a mere $30 worth of fuel. *** I admit flying over large stretches of water sharpens your focus on fuel management and demands good maintenance but I’ve also flown aircraft over large forests in the U.S. and frankly, I think I’d rather take my chances with a water landing. *** To address such concerns and to inform pilots flying without a medical who might want to venture to these lovely islands, Aviators Hot Line director Jacob Peed plans free webinars on both subjects. Check with the publisher later for details on these informative presentations which may later be offered as podcasts.