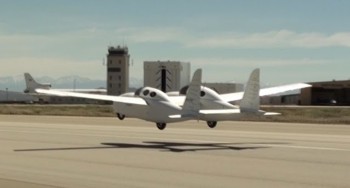 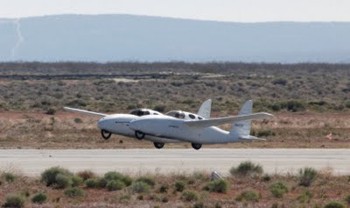 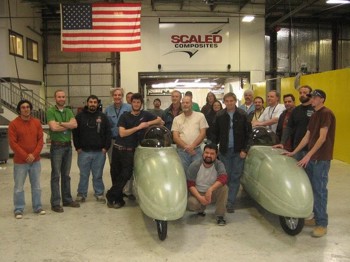 Okay, so no way this is ever going to be a Light Sport aircraft, but this is just too much fun and I had to pass it along. *** Famed aircraft designer Burt Rutan has been at it again, this time with his eclectic take on a flying car that began life as an electric-powered flying testbed.   *** Aviation Week’s online blog (also picked up by Wired magazine) shared information released exclusively to it by Rutan’s Scaled Composites company known in recent years for many fantastic projects including Spaceship One and White Knight.   *** Called BiPod, the flying car became a crash program, completed in just four months and already in test flight mode. Rutan himself retired in April of this year. *** Model 367 BiPod is characteristically, wonderfully unconventional as have been all of Rutan’s many designs. *** The two-seat, hybrid-electric “roadable” aircraft (mini-rant: I sure hope that term doesn’t replace flying car, which flows off the tongue much more agreeably, don’t you think?), originally conceived as a fast, inexpensive electric aircraft, morphed into a flying car. The program was hurried along, says Aviation Week, to allow Rutan to shepherd it through to completion before he hung up his cad cam computer’s mouse. He was in the shop cutting, fabricating and sanding many nights long after the rest of the team went home. *** First “flight” was last March 30. The unusual-looking carplane has made several short hops at Scaled’s Mojave, California airport location.   *** And the hops were just that: speed, built up from battery-powered driving wheels, was translated into short glides above the runway. Fun stuff! *** The fully operational BiPod will carry two 450cc gas engines, one per fuselage, which will drive generators feeding an electric power system. In land mode, the system will drive motors in the driving wheels at the aft location of each fuselage pod. The forward wheels are steerable. *** During flight, the power grid will drive four 15kW motor-driven props: one on each nose, two on the horizontal stabilizer. *** Good old Burt: you can never count out his sheer design originality. *** Lithium batteries fill the nose of both pods. They are inflight-rechargeable and will augment takeoff power from the two engines.   *** Think of the advantages for driving with disagreeable companions (mothers-in-law?) too. They can ride in the right hand pod, leaving the driver in the left pod, in blissful silence. *** Interestingly, only the throttle is common to both…cockpits? Car interiors? Carpits? Your choice: driving is exclusively from the left pod, and flying is done from the right. Hmmm…that means mischief could still be done from the other pod by a cranky passenger. *** Span is almost 32 feet. Wings detach for driving. Cruise speed in flight: 200mph with max range of 750 miles at 100 mph. *** Driving, BiPod can go at freeway speeds for 820 miles on a tank of gas or 35 miles on batteries alone. *** It’ll be fascinating to watch what happens with this project. It’s a bit challenging to imagine this project ever coming to the market. Taking a road trip with the fam separated into two compartments seems strange…although anyone with surly teenagers (or those poor, traditionally maligned mothers-in-law) will easily see some potential benefits.