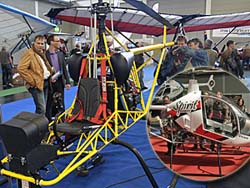 AirLony Skylane (not the Cessna version). 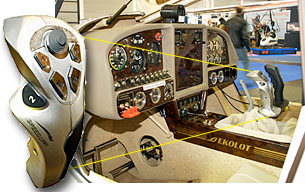 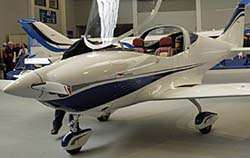 As Aero 2012 moves toward a conclusion our wandering reporter updates you on several more attractive aircraft. All photos by Dave Unwin —DJ ||||

Having already decided that the Cicare Spirit was pretty minimalist as far as helicopters go, you may imagine my surprise when I saw an even more minimalist machine! This was the Hungarian Hungarocopter, which took helicopter minimalism to an entirely new level! Powered by either a 136- or 165-horsepower Subaru, and with a gross weight of 992 pounds, it definitely looked like flying it would be a bit of a thrill! *** As usual the show featured a fair few curiosities, and my interest was piqued when I spotted a machine that looked very much like a Cessna, with “Skylane” on the tail. As it quite clearly wasn’t a Skylane (being nowhere near big enough) I investigated further and discovered that it was a new-ish German ultralight powered by an 80-horsepower Rotax. If anything, it looked very much like a C-152 fitted with gull-wing doors, and I couldn’t help but wonder if Cessna’s lawyers aren’t already taking a look at both the design and the name. *** Talking of Cessna, despite all the stories about prospective European purchasers of the Skycatcher being offered their deposits back, I couldn’t help but notice a D-registered Skycatcher on display on the German Cessna dealer’s stand. Confused? I was, too! *** Another new aircraft for Aero 2012 was the Redbird from Italian company Oma Sud. Powered by a 100-horsepower 912S and fitted with an electric variable-pitch propeller, this sleek-looking two seater is primarily of composite construction, and features a low wing and a forward hinged canopy. *** I was quite taken with the Ekolot JK05L Junior. Looking vaguely reminiscent of the venerable Bolkow Junior, it has a gross weight of 1,040 pounds, is powered by an 80-horsepower Rotax 912, and cruises at about 100 knots. The double center stick was especially interesting, as even the flaps are controlled via buttons on the pilot’s stick-top. *** An aircraft with a very shapely wing was the Ellipse Spirit. Available in various weights and categories, with a choice of fixed or retractable gear, two different wing spans and eight different engines, this very smart side-by-side two seater boasts a maximum cruise speed (in the short-span retractable) of 150 knots, and a climb rate of over 1,400 fpm yet a stall speed of only 32 knots. Fixed slots in the leading edge clearly help the slow-speed handling, and I must say I’d very much like to test both its high and low-speed performance! *** Czech company Skyleader had its full range on show — from the single seat 100 model (photo) to the 580 kilogram 500 and 600 kilogram (1,320 pound) 600. The single-seater uses either the 50-horsepower Rotax 503 or 65-horsepower 582, and has a gross weight of 693 pounds. Skyleaders two-seater models also use Rotax, ranging from the 80-horsepower 912 to the turbocharged 115-horsepower 914 Turbo. Although Skyleader has traditionally made low-wing aircraft of metal construction, it is also working on a high-wing carbon-composite side-by-side two seater. Aimed primarily at the flight training market, it is powered by an 80-horsepower 912 which spins a three-blade ground-adjustable prop. More tomorrow, the final day of Aero 2012!