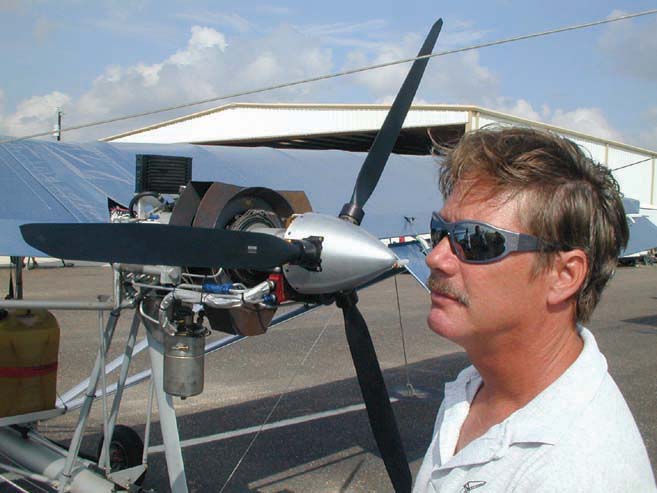 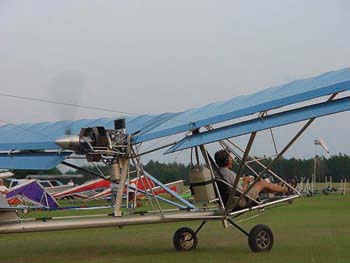 The Dragonfly hang glider tug may be the slowest-stalling aircraft in history to have a turbine engine. 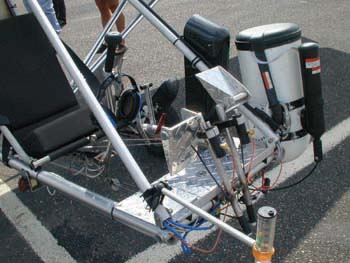 Most turbine-aircraft cockpits look daunting, but the turbine Dragonfly makes do with only the basics. 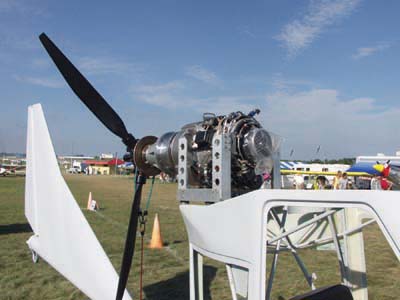 The Dragonfly isn’t the only ultralight with a turbine engine. This Titan, seen at AirVenture 2002, had a similar work in progress. 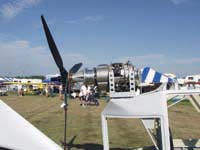 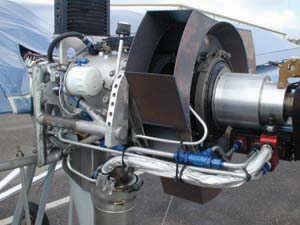 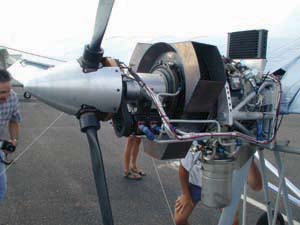 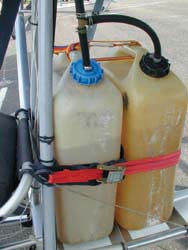 Just when FAA officials believe they have it figured out, individual actions can introduce new questions. I’m referring to the light-sport aircraft category of new rulemaking proposed by the aviation agency.
Consider the turbine engine. Why, you may ask, is turbine power the subject for a column that focuses on the lightest and slowest aircraft? The answer is that turbine engines are actually being used on the these aircraft, and they may be the right power for the use intended.
Turbine Tug
For two decades, hang gliders have been towed aloft by specially built ultralights. Aircraft like Bobby Bailey’s Dragonfly have succeeded at launching hang glider pilots who live in flat areas like Florida. They don’t need mountains. Just give them a Rotax engine and they’ll take to the skies in swarms.
Witness the spring ritual of dual hang gliding competitions in central Florida. Each year as the Sun ‘n Fun fly-in ends, pilots converge from all over the world. The best distance racing aviators come to prove who’s the best. Every one of them was launched by one of a fleet of no less than 17 Dragonfly ultralights and trike tugs.
This year they all witnessed something new. The Rotax hegemony was challenged by no less than a gas turbine on the slowest-flying ultralight ever made. (A Dragonfly can stall as slowly as 18 mph and routinely tows hang gliders at speeds in the 20s.)
My goal isn’t to provide the details of the engine here; it will probably never enter production. Besides, a lesson about turbines is a subject for another writer.
But look what this machine can do!
Record Flight in Florida
Developer Russell Brown of Quest Air (one the two main Florida aerotow locations) has been working on his turbine tug for many months. Before that, he installed numerous engines of increasing power seeking to perfect the powerplant for what is essentially a tractor. Tug pilots climb as fast as possible over a 5-minute window; then they descend as fast as possible to launch another hang glider. It’s tough duty for pilot and plane. Brown calls his creation UltraTug. Others have tagged it Tugzilla.
The turbine-powered Dragonfly tried to set a record last summer, towing a hang glider to 17,999 feet. Under F.A.R. Part 103, ultralight vehicles may not exceed 18,000 feet msl.
On a second attempt, the UltraTug carried its pilot and a hang glider and pilot to the maximum altitude allowed. On the back of the line was instrument seller Steve Kroop. He writes, “Quest Air (where the flight started) is at 118 feet msl, so our AGL (Above Ground Level) is almost the same as our MSL (Mean Sea Level). Out west, thermals regularly take pilots to 18,000 feet, [but] I don’t know [of any other location] where they can get that high above the ground.
“The view was incredible at nearly 18,000 feet (3.4 miles up). It is a perspective that we don’t often get.”
According to a charted barograph report-from one of Kroop’s Flytec instruments, of course-the flight saw an average climb of 430 fpm to the ceiling. They started at 750 fpm and were still doing 300 fpm at 18,000 feet, proving the altitude viability of the turbine engine.
The team checked winds at altitudes to find a modest 14-17 knots at Flight Level 180. A cloud deck at 24,000 feet allowed towing clear of clouds as required. Though temperatures were in the mid-90s at sea level, both pilots were dressed for frigid air aloft.
Kroop flew a Shadow 148 intermediate-performance glider supplied by Just Fly, the importer of Aeros hang glider wings. A full-body-covering M2 Acer harness kept the hang glider pilot warm, and Flytec’s 4020XL electronic digital instrument provided altitude info and produced the barograph.
Industry chronicler Davis Straub confirmed the high flight. “Steve may be the hang glider pilot who has gone higher above the ground than any other hang glider pilot in the U.S.,” he said. “[But British pilot] Judy Leyden went much higher (40,000 feet) under a balloon in Jordan.”
The Uncertain Future
In the FAA’s new SportPlanes| document, the authors specifically excluded light aircraft powered by turbine engines. If the rule passes as proposed, the turbine engine’s future in light-sport aircraft is threatened.
U.S. Hang Gliding Association leaders agonized over the turbine when they submitted the association’s official response to the SportPlanes| proposal. These unpowered flyers were loathe to let turbines be dismissed without due consideration.
The turbine Dragonfly is not a product and may never be more than a grand experiment. Its fuel use is disproportionately high compared with Rotax power, and finding parts to make more engines could prove challenging.
Nonetheless, Brown is to be congratulated for pushing the envelope. This kind of activity may give FAA regulators reasons to reconsider, and that might keep the doors open to new ideas that can improve aviation.
FOR MORE INFORMATION, contact Russell Brown at Flytec Instruments, 6548 Groveland Airport Road, Groveland, FL 34736; call 352/429-8600; e-mail info@flytec.com.
To review all “Light Stuff” columns that have appeared in KITPLANES®,  visit www.ByDanJohnson.com, which links to the KITPLANES® with articles of interest.