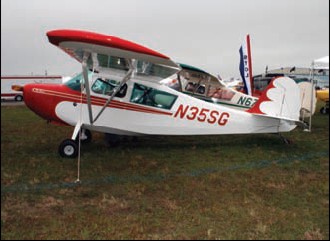 Are you uncertain about the certification used for
LSA? Do you find imported S-LSA too expensive?
Are you struggling to accept an engine such as
Rotax, with its liquid cooling, 5500 max rpm range, and
gear-driven prop?

If you ask yourself these questions, you could choose
the Luscombe featured in this article or select the newest
entry from American Champion Aircraft, the Champ, which
sells for under $90,000, or $100,000 nicely equipped.

As with the Luscombe, a Continental O-200 powers the
Champ. For some, this is enough to suggest a purchase. One
shortcoming is that the Champ has limited useful load, given
its empty weight of 920 pounds. Unlike an S-LSA approved under
ASTM standards (such as the LSA-8), the Champ can weigh
more than 890 pounds because American Champion continues
to build its LSA-like airplane under Part 23 certification. But the
laws of physics still apply, and the Champ has only 292 pounds
of payload, assuming a full 18 gallons of fuel.

My first 35 hours were in a Champion Citabria, and I have
a soft spot for the design. I look forward to doing a flight
review. Until then, I can rely on my LSA-expert friend Jim
Sweeney, who has many hours in the Champ and assures me
it flies like a sweetheart. With the Champ and the Luscombe
LSA-8, American pilots interested in pursuing LSA flying can
choose between two proven all-American designs.