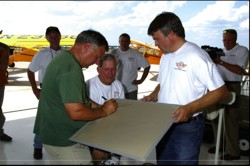 Tim Elliott holds the baggage compartment
back panel for Legend employees to sign. 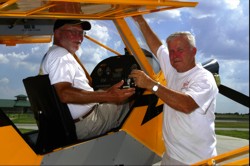 Pat Bowers hands over the keys to N77355 to
Rich Giannotti.

RICH GIANNOTTI
I may be the only person who attended
Sun ‘n Fun and EAA AirVenture Oshkosh
this year with my airplane without it leaving
the ground. Why? Because my uncovered
fuselage was on display at Sun ‘n Fun in
American Legend Aircraft’s booth, and the
whole airplane was at Oshkosh, but not
ready to fly.

That changed on August 21 when my
friend, Rudy, and I traveled to Sulphur
Springs, Texas, to pick up my new Legend
Cub, serial number 1003, N77355, and
Legend’s first customer airplane.

We arrived at the American Legend’s
facility on Sunday afternoon as several
people were putting the finishing touches
on it. Darin Hart, one of the principals of the
company, was applying that cool “Legend
Cub” decal on the tail. Several others were
hovering here and there.

Monday morning, August 22, brought
the full Legend staff to bear on the airplane.
The FAA was to arrive mid-morning to issue
the certificate needed to allow a test flight.
Lunchtime came, and a cake with yellow and
black icing commemorated the first delivery.

After lunch, Ronald Wood of the FAA’s
southwest manufacturing inspection district
office (MIDO) issued the temporary airworthiness
certificate that allowed Kurt Sehnert to
test-fly the airplane. I was excited to see Dusty
fly-all Legend Cubs must have names; it’s a
factory rule!-but I was not nervous. It was
just the next logical step. Kurt had an uneventful
flight and recorded the required data. Then,
we all sat in his office while Mr. Wood issued
the permanent airworthiness certificate and
made sure I understood the operating limitations
for this S-LSA.

Tim Elliot, president of American Legend,
gathered everyone who worked on my airplane
and had them sign the back of the baggage
compartment partition. Then Tim organized a
dinner at the local $100 hamburger place for
everyone, including the employees’ families.
After dinner we went back to the airport to do
what we came for-fly Cubs!

It was time; I was going to fly my airplane
for the first time. It flew straight and strong,
and I pulled off a few great landings-ones
where you can use the airplane again.

On Tuesday morning, it was time to blast
off for the 1,200-nautical mile trip to Long
Island, New York. When Rudy offered to accompany
me on this trip, I did not hesitate to
accept. He has been a pilot for only three years,
but he has more than 900 hours; he loves to
fly. He is now the world’s expert on the comfort
of the rear seat in a Legend Cub. He said it’s
pretty good. The extra 3 inches of width in the
fuselage really pays off back there.

We got a late start from Sulphur Springs
because taking the airplane away was like
taking the only daughter from 50 parents. But
soon we were climbing, looking for cooler air.
We leveled at 5,500 feet where the winds were
light and variable and saw 85 knots on the
GPS. A giant high-pressure system was parked
over the eastern part of the country offering
clear flying conditions, but we paid for it with
a head wind after the first leg. We planned
2-hour and 30-minute legs, which gave us a
45-minute reserve.

Our first stop was Carlisle, Arkansas. The
place was deserted, but it did have self-service
fuel. We topped off with 15 gallons’ fuel,
two bottles of water, and some granola
bars, and off we went. Dusty may not fly as
fast as an airliner, but it has more comfortable
seats, and the food is better.

Our next stop was Humphreys County,
Tennessee, a pretty airport in equally pretty
country. Because of our late start from
Sulphur Springs, we decided to choose a
closer destination for the night. I needed
a hotel, shower, and dinner in that order.
After a quick look at the chart, we decided
Bowling Green, Kentucky, was calling us.
Co-Mar Aviation lent us a hangar and
drove us to a hotel. They are a great bunch
of guys who really loved the Legend. Rudy
said the hardest part of the trip was trying
to leave the fuel stops without rushing the
people who wanted to look at Dusty.

We continued on our planned route
the next morning to Madison, Kentucky.
The weather was great (except for head
winds), the panel mounted GPS never
skipped a beat, and 20 gallons of usable
fuel is more than enough range for this
59-year-old body.

Our next stop was Upshur County, West
Virginia, in another stunning setting. Once
again, a friendly fixed-base operator (FBO)
and a group of curious Cub watchers greeted
us. So far, we were on our original plan, but the
next stop after Upshur was too far based upon
the winds. We replanned and stopped at York,
Pennsylvania.

If we’d had any kind of tail wind we could
have made it from York to home in daylight
without a stop, but it was not in the cards.
Instead, we stopped at Trenton, New Jersey.
The next morning Dusty got its first look at
the Atlantic Ocean as Rudy flew us along the
beach “at or below 500 feet” while talking
to JFK International’s tower. We landed at my
home airport, Brookhaven, about 9:30 a.m.,
and I spent the rest of the day cleaning eight
states worth of bugs off the airplane. No, there
were no bugs on the trailing edges. Cubs are
slow, but not that slow!

We put about 17 hours on the tach with no
problems, just a great trip in a great airplane.
Rudy and I are going to put our names on the
Legend Cub ferry pilot list; I hear it’s pretty
long already.