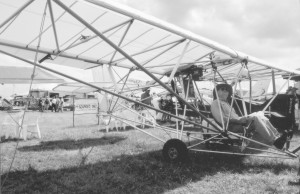 On the Horizon at M-Squared
Paul Mather has another airplane in the works at his Alabama company. Called the AeroTug, it made its first public appearance in the summer of ’03 in Wisconsin.
Once called “Breese AT,” the new entry is built by M-Squared in a deal involving former Second Chantz Aircraft Recovery Systems owner John Dunham. Dunham says he approached Mather and M-Squared. They agreed that Mather will build the customized rig and Dunham will market and distribute it.
Already very familiar with M-Squared airplanes, Dunham leases one he owns to TV production studios as a filming platform. He explains, “I’ve been working with Paul to develop a new tug ultralight to compete with the Dragonfly. We will be doing flight and hang glider tow testing in Alabama, and then I will be flying it around to all the Florida parks to show it off. I’ll be the exclusive marketing agent for this aircraft.”
In explaining his request to Mather’s company, Dunham said that he wanted it to be, “…based on the M-Squared Breese single-seat design with the 2-place, single-surface, slow, strutted wing, plus a Maule-type tow hook release under the rudder, tundra tires, and a specially-built Rotax 670 – almost 100 hp at the same weight as the Rotax 582.”
About this hybrid model Mather says, “She’ll climb all day at 25 mph while towing a hang glider. The climb angle is a real eye opener.” The M-Squared model is reportedly lighter than a Dragonfly, which explains some of its impressive performance. Another reason is the low-speed single membrane airfoil (a direct derivative from the Quicksilver hang glider of the 1970s).
As of the summer of ’03, Mather had starting test-flying but towing had not been accomplished. Some adjustments are likely to get the tow angles and releases perfected, but these tasks shouldn’t unduly slow progress.
With an estimated 50 Dragonfly towplanes operating, no new tug will overtake it anytime soon. But choices are always good. Dunham says, “I plan on marketing it for around $25,000 ready to fly, including a BRS 750 VLS [vertical-launching emergency parachute system].” Neither Mather nor Dunham have overblown expectations; they only hope to sell a few a year. But since M-Squared has a viable enterprise in ultralight aviation, a few extra sales a year are useful if the development cost isn’t too high.